Mesothelioma in the Marines

United States Marines who served between the 1930s and early 1980s may have been exposed to asbestos. Asbestos is the only known cause of the deadly cancer mesothelioma and was widely used in Marine Corps ships, vehicles, and bases. Thankfully, Marines who develop mesothelioma as a result of their military service can access treatments and compensation from the U.S. Department of Veterans Affairs (VA).

The U.S. Marine Corps is a small, elite branch of the military that is trained to fight battles in the sea, on the ground, in the sky. Beginning in the early 1930s, the Marine Corps (and all other U.S. military branches) relied on asbestos-based products to help achieve victory.

Asbestos is a highly durable mineral made up of tiny fibers that resists heat, corrosion, and sound. Initially, the U.S. government thought that asbestos-based products, like construction materials, were safe since manufacturers hid the facts.

However, asbestos is now known to cause a life-threatening cancer called mesothelioma and other deadly illnesses. Marine Corps veterans whose Military Occupational Specialty (MOS) were in construction often have the highest risk of developing mesothelioma, but any veteran exposed to asbestos is at risk.

History of Asbestos Use in the Marines

Since asbestos use was so widespread, Marines may have been exposed in several different ways. See how the Marine Corps relied on asbestos below.

Marine barracks were often lined with asbestos insulation to fireproof them. This was typical of the military before the dangers of asbestos were known. Asbestos-containing materials like pipes and gaskets also were used to build Marine bases, barracks, and other buildings.

Asbestos products could be found in the following locations:

As the materials wore down over time or were removed during maintenance, it was easier for asbestos exposure to occur.

Marines with the highest risk of asbestos exposure were the ones that built or repaired barracks. These Marines had to handle the materials made from asbestos, and as these products were disturbed, asbestos fibers were released into the air.

Marine veterans who served aboard U.S. Navy vessels also have a higher risk of developing mesothelioma than those who didn’t, as virtually every ship was built with asbestos between the 1930s and early 1980s.

Marines working on Navy ships could have been exposed to asbestos at every turn.

Asbestos exposure was a risk whenever someone worked on:

When asbestos on Navy ships was disturbed, it could remain airborne for hours and anyone aboard could easily inhale it. The risk was particularly high in boiler rooms and engine rooms, which had extremely poor ventilation. 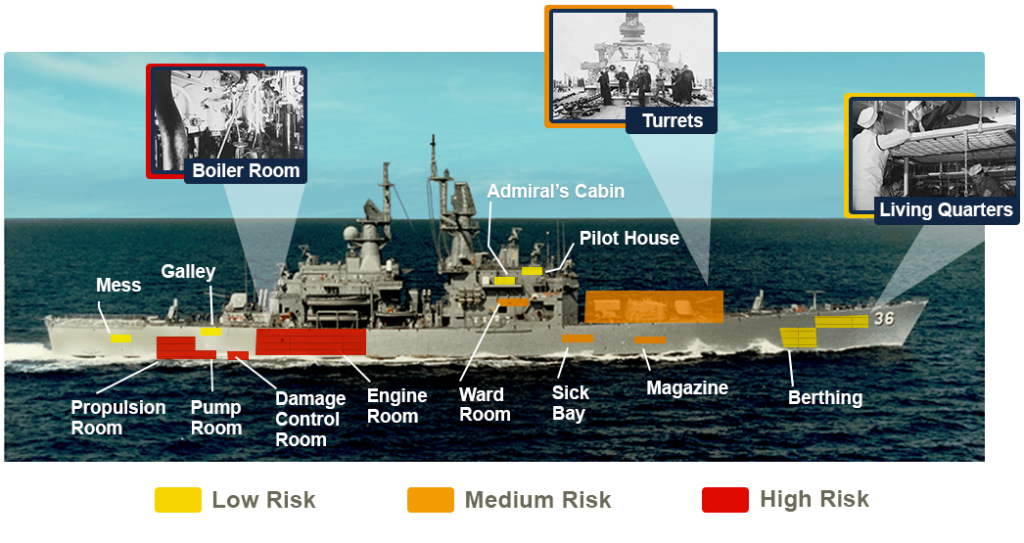 Asbestos could also be carried to other areas of the ship on someone’s skin, hair, or clothing after initial exposure.

Throughout most of the 20th century, Marines working in shipyards were also at high risk for asbestos exposure.

Before the 1980s, ship parts like incinerators and boilers were lined with asbestos insulation to protect them from fires and excessive heat. As Marines installed, repaired, or replaced these components, asbestos fibers were released and possibly inhaled.

The military’s largest shipyards were in California, New York, Washington, Virginia, and Oregon. Asbestos-containing products were still being used in Navy ships until the end of the 1970s and early 1980s.

Tanks and other motor transport vehicles used by the Marines contained asbestos. In the 1960s, the Marines used the M60 Patton tank, which also used asbestos insulation for fireproofing. Gunners operating the tank also wore gloves lined with asbestos to protect them from burns.

Transport vehicles, all-terrain vehicles, and amphibious assault vehicles all had similar asbestos risks. As the insulation in these vehicles wore down, the asbestos exposure risk increased.

Marines working as mechanics on aircraft or transport vehicles also had a high risk of asbestos exposure. These Marines often came in contact with seals, gaskets, brake pads, and clutches made with asbestos.

Marine Corps veterans are not the only ones who may be at risk of developing mesothelioma today. If their family members lived on a Marine Corps base where asbestos materials were used, they may have been exposed indirectly.

If asbestos fibers were disturbed as a Marine worked, they could get stuck on the Marines’ uniforms, hair, or skin. Family members who hugged their loved ones or handled these uniforms could have unknowingly been exposed to asbestos fibers.

According to the VA, while it is very rare, some active-duty Marines may be exposed to asbestos while overseas in Iraq or nearby countries. Older buildings in this region that used asbestos in their construction can become damaged and release asbestos into the air.

Get a free veterans packet to learn more about the risks of asbestos exposure.

There are many legal and VA benefits available that can ease the burden of living with mesothelioma for veterans and their loved ones.

Marines with mesothelioma can access free or low-cost mesothelioma treatment if they have VA Health Care. Some of the world’s top mesothelioma surgeons, including Dr. Robert Cameron and Dr. Avi Lebenthal, treat veterans from all over the country.

In addition, veterans may be eligible for a health registry evaluation — a free medical screening for possible long-term health problems related to asbestos and other hazards. This is available through the VA, but veterans do not need to be enrolled in VA Health Care to take part.

The VA has multiple benefits to help pay for the cost of living. These benefits are meant to compensate veterans if they cannot work. Disability benefits and pensions can also allow Marines with mesothelioma to focus on their health without worrying about paying the bills.

When it was revealed that asbestos was dangerous, manufacturers faced a huge number of lawsuits, and many filed for bankruptcy. Bankrupt manufacturers were court-ordered to set up trust funds to pay victims.

More than $30 billion is currently available through asbestos trust funds.

Legal claims are another way Marines with mesothelioma can pursue compensation, especially if they had occupational asbestos exposure after their military service.

No legal action is taken against the U.S. military or former employers through a mesothelioma lawsuit.

VA benefits are one of the best resources available to Marine veterans with mesothelioma. The VA offers disability, pension, aid and attendance benefits, and more.

These benefit programs can help cover the cost of living while you receive treatment and are in recovery. While you can get treatment at a public cancer center, you may not have access to VA benefits at a non-VA hospital.

All you need to claim your benefits are:

Veterans’ dependents and survivors may be eligible for benefits as well.

If you’re ready to get your VA benefits, our VA-accredited claims agents can help you every step of the way. They can put together all the documentation you need to get the maximum benefits.

Get help with filing your VA benefits now.