Mesothelioma in the U.S. Army

Through much of the 20th century, the U.S. Army and all other military branches were major consumers of asbestos-based products. Unfortunately, asbestos exposure is now known to cause a deadly cancer called mesothelioma. U.S. Army veterans with mesothelioma may be eligible for health care benefits and financial compensation.

Some benefits are accessed through the U.S. Department of Veterans Affairs (VA) while others are available outside of the VA.

Learn about the top benefits for U.S. Army veterans with mesothelioma below.

The VA has several financial benefits to help U.S. Army veterans cover the costs that a mesothelioma diagnosis brings.

Veterans can apply for VA benefits by working with a VA-accredited representative, such as a lawyer.

Specialized Treatment Options Through the VA

As of 2021, some of the world’s best mesothelioma doctors have partnered with the VA Health Care System to treat veterans. One such specialist is Dr. Avi Lebenthal, a surgeon whose team treats 300 mesothelioma patients each year at the Boston VA Hospital.

Manufacturers of asbestos-based products knew the risks posed by their products but sold them to the military and the public anyway. When the truth was exposed, these companies faced an influx of lawsuits that drove many of them to bankruptcy.

The U.S. Court system ordered the companies that declared bankruptcy to set up trust funds so victims would still get paid (as bankrupt companies cannot be sued). Currently, an estimated $30 billion is available through asbestos trust funds.

Outside of VA benefits and trust fund claims, veterans may also be able to file legal claims to access compensation. These claims (also known as mesothelioma lawsuits) award $1 million on average.

The U.S. Army and other military branches are not sued in this process. Legal claims are filed against the makers of asbestos-based products that knew the dangers of asbestos but hid them from the military and civilians.

History of Asbestos Use in the U.S. Army 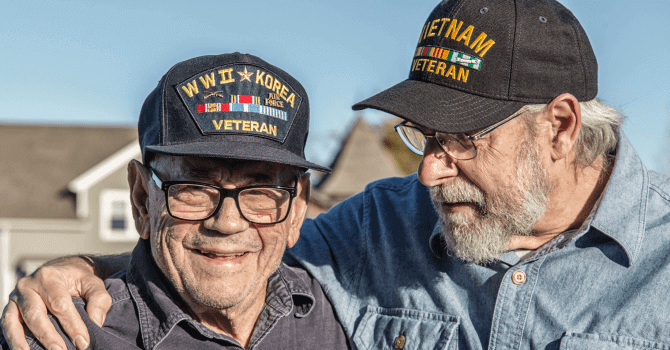 Asbestos-containing products were widely used by the U.S. Army from the 1930s until the late 1970s. In turn, thousands of veterans have developed mesothelioma as a result of asbestos exposure during active duty.

When asbestos materials are worn or damaged, fibers are released into the air. Those nearby can inhale or swallow them. The asbestos fibers can then get lodged in the lining of the lungs or abdomen, causing irritation.

This continued irritation may lead to the development of mesothelioma or other asbestos-related diseases 20-50 years later.

Manufacturers of asbestos-containing products hid the dangers posed by asbestos from all of their customers, including the U.S. Army, until the late 1970s. By then, an overwhelming amount of evidence had linked asbestos to deadly cancers.

Once the risks were known, the U.S. Army began removing and replacing asbestos-containing products. The VA also began offering special benefits so that veterans with mesothelioma could access financial aid and medical support.

How Were Soldiers Exposed to Asbestos? Asbestos is an extremely effective fireproofing agent. The U.S. Army and other branches of the Armed Forces used asbestos to insulate and fireproof their buildings, ships, planes, weapons systems, and equipment.

Common asbestos products used by the military include:

Learn more about how asbestos was used in U.S. Army buildings, vehicles, and construction projects below.

Soldiers living in U.S. Army bases may have come in contact with asbestos as the mineral was a common component in construction materials.

Asbestos in U.S. Army barracks could be found in:

Although the U.S. Army has removed or replaced most asbestos-containing products, it was impractical to get rid of all of them. Because the mineral is not generally considered a risk if it is not disturbed, some older barracks still contain asbestos today.

U.S. Army bases were not the only structures with a high risk of asbestos exposure. The use of asbestos was also common in other U.S. Army buildings, such as mess halls and office spaces. In fact, almost every building made by the U.S. military before the late 1970s contained asbestos.

Once those buildings were occupied, time and normal wear and tear could cause asbestos fibers to be released. Thousands of service members were put at risk while going about their daily lives. Soldiers could have been exposed in a variety of different locations.

Almost all U.S. Army vehicles built prior to the 1970s contained asbestos. Ambulances, buses, jeeps, and tanks had asbestos-containing components. Asbestos was used in the following vehicle parts:

However, asbestos endangered the health of drivers and mechanics, especially those who often handled worn and damaged car parts. Removing or repairing car parts with asbestos could send tiny asbestos fibers flying into the air.

U.S. Army veterans who worked in construction or demolition were at high risk of asbestos exposure.

Any time asbestos-containing construction materials were disturbed, those nearby were put at risk of inhaling the airborne fibers. This could happen during the construction of new buildings and the repair or demolition of old ones.

In the late 1970s, once the risks associated with asbestos were known, the U.S. Army Corps of Engineers was tasked with removing asbestos from bases. Soldiers with this Military Occupational Specialty (MOS) who served at this time were very likely exposed to airborne asbestos fibers. Although the U.S. Army stopped using asbestos in the 1980s, soldiers who served in the war in Iraq may still have been exposed to asbestos.

Some nations in the Middle East continue to use asbestos in buildings and other infrastructure. If these structures were damaged or demolished, asbestos was likely released into the air and may have been inhaled by nearby U.S. Army personnel.

The dangers of asbestos exposure were not limited to soldiers. Their family members were often put at risk as well, especially those who lived on military bases.

Family members were at risk of inhaling or ingesting airborne fibers disturbed during construction projects and renovations on U.S. Army bases.

Family members may also have been exposed to asbestos during contact with U.S. Army soldiers themselves. When asbestos fibers stuck to a soldier’s clothes and equipment, they could be brought back to the family’s living quarters, potentially leading to secondhand exposure.

Anyone serving on a U.S. Army base may have come in contact with asbestos, but some jobs carried a higher risk of prolonged or significant exposure. For example, mechanics and construction workers generally had a greater risk of asbestos exposure. They had to work with asbestos-based products like insulation, cement, and brake pads on a daily basis.

Veterans who have developed mesothelioma but are unsure how or where they were exposed may want to speak to a VA-accredited claims agent (who is specially trained to help veterans apply for benefits) or mesothelioma lawyer.

Lawyers and agents can help patients look through their military service history and pinpoint where they were likely exposed.

“Several years ago, I was contacted by an Army artilleryman with pleural mesothelioma. He was inquiring about any VA benefits for which he might be eligible. I explained that we could file for VA Disability, but at the time, he knew of no Army exposure, and we opted not to file the claim. However, several months later, he called me back and explained that his lawyer had managed to figure out that the gloves he wore while handling hot artillery shells for six years in the Army were actually made out of asbestos. We filed the claim, and he was approved. So, never say never.”

Filing a VA claim can seem like a daunting task, but it’s not something you have to do alone.

Our VA Support Team has years of experience determining how and where veterans were exposed to asbestos.

We can help you take the first steps to:

If you or a loved one was exposed to asbestos while serving in the U.S. Army, you may be eligible to file a VA benefits claim. Compensation from the VA can provide valuable security and peace of mind for you and your family.

You may also be able to take legal action and get even more compensation. Connect with a team member now and get help filing your VA claim.

View 8 Sources
Back to Top