Asbestos is a naturally occurring mineral that can be mined and used as an insulating and fire-resistant material. In addition to the traits that made it a reliable product, it was discovered to be a highly toxic material. Asbestos materials have been directly responsible for hundreds of thousands of deaths through the diseases it causes like mesothelioma, asbestosis, and lung cancer.

Many times after being diagnosed with mesothelioma your physician may ask you if you have been exposed to asbestos. Asbestos is a causative factor for mesothelioma. Some of the imaging studies may show underlying pleural plaques which are indicated that they have been around asbestos and may have underlying asbestosis.

If you have symptoms of mesothelioma of any asbestos-related disease, it’s important that you inform your doctor of your asbestos exposure so that appropriate testing can be done.

Topics on this page: 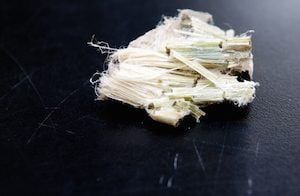 Asbestos was once considered a safe product to use for construction. It is strong and heat resistant, making it a good insulating material. It was also cheap. For manufacturers and builders, asbestos was a wonder mineral.

It was used in virtually every type of insulation job imaginable from WWII to the late 1980s. This asbestos exposure caused mesothelioma among countless blue-collar workers and veterans.

Asbestos fibers were mixed into wet cement and woven in factories to make fabric. It was used in things ranging from fire-proof vests to commercial and home insulation.

It wasn’t until the late 20th century that scientists discovered that asbestos was a carcinogenic material. Carcinogens are substances that are known to cause cancer in human tissue. Many toxins found in tobacco, like arsenic, are examples of proven carcinogens. Researchers established the link between mesothelioma and exposure to asbestos in the 1970s.

The History of Asbestos

Asbestos has been used for thousands of years. It was used in ancient Greece to make long-lasting candles wicks. The Egyptians used fabric made of asbestos to put on the burial clothing of ancient pharaohs. Ancient Romans used tablecloths and napkins that were woven from fibers containing asbestos. It has also been found in pottery that dates back to the Stone Age.

In the late 1800s, the industrial revolution sparked the use of asbestos in many different products. The demand for the substance grew and new asbestos mines were uncovered. As the quantity of asbestos grew, so too did the number of asbestos products. Asbestos became commonplace in shipbuilding and the railroad industry.

The next industrial boom happened around WWII. The huge production of aircraft and other vehicles skyrocketed. People discovered even more uses for asbestos. Brakes were made from asbestos and put into automobiles. Friction products and clutches in automobiles were also made using asbestos.

Some countries have completely banned the use of asbestos. Asbestos is still used legally in the U.S. but only in limited areas.

Asbestos in the Military

Asbestos was particularly well-suited for military applications. So veterans could find asbestos almost everywhere they were. The U.S. armed forces used asbestos in every military branch. This is why over one-third of mesothelioma victims are U.S. veterans. Navy veterans usually have the worst history of asbestos exposure.

The U.S. government mandated that all submarines and ships be fireproofed with asbestos. This also insulated submarines from the effects of cold ocean waters. Yet, this also put submariners, shipbuilders, and seaman at a uniquely high risk of developing mesothelioma.

Here is some more information about veterans, asbestos exposure, and mesothelioma:

Scientists now know that there are six different types of asbestos. All types can cause mesothelioma even though they have different chemical properties.

The types of asbestos include:

Asbestos can be friable or non-friable. Friability describes substances that crumble easily. Friable asbestos can be broken apart just by touching it. Non-friable (or “bonded”) asbestos is more sturdy. Bonded asbestos products are made up of asbestos fibers mixed with substances like cement.

Some friable asbestos products are 100% asbestos. Asbestos only makes up about 15% of non-friable type products.

There are dozens of different kinds of jobs that have exposed its employees to asbestos throughout the years. Veterans make up a huge portion of people with the greatest risk of asbestos exposure.

Other job categories that have a high risk of having exposure to asbestos include jobs related to the construction industry. Exposure is higher in electricians, steamfitters, and pipefitters, who come in contact with insulation all of the time as part of their job. Because these types of jobs are usually associated with men, it is men who make up the vast majority of mesothelioma sufferers.

There is another category of people at risk for mesothelioma and other asbestos-related diseases. This category consists of the family members of workers in high-risk industries. They inhale secondhand asbestos from fibers brought home on the clothing of their family member.

Exposure can also happen at home. Many homes built before 1980 are insulated with asbestos-containing insulation. Asbestos can also be found in homes that contain certain types of roofing, floor tiles, appliances, furnaces, fireplaces, window caulking, and plumbing fixtures.

Renovating older homes can release asbestos into the air. This can cause exposure to family members. There are professional companies that specialize in safe asbestos removal.

Asbestos is heavily used throughout China and India, with no signs of banning the substance. More than 50 countries in the world have banned the use of asbestos due to its toxicity.

Asbestos is not banned in the United States or Canada.

In 1989, the Environmental Protection Agency made a plan to get rid of and ban most of the asbestos-containing products in the United States. This was after a decade-long research paper with hundreds of thousands of pages of evidence highlighting the dangers of asbestos. But the asbestos industry blocked the ban in 1991.

“Though it acknowledged that asbestos in any amount caused cancer, in 1991 the U.S. Court of Appeals for the Fifth Circuit threw out most parts of the EPA’s rule, saying the agency failed to prove that a ban was the ‘least burdensome alternative’ for controlling the public’s exposure,” the EWG Action Fund says.

In other words, the court decided that banning asbestos would be too expensive for companies producing asbestos-containing materials. On the positive side, the use of asbestos has declined significantly since 1999. Even so, about 2 million metric tons of the mineral is mined around the world every year.

In spite of asbestos bans and restrictions, about 43,000 people in the world die from asbestos exposure. This is because it takes between 10-50 years from the time of exposure to the onset of mesothelioma. Even countries that have banned the mineral have many people harboring asbestos in their bodies.

The most common condition arising out of exposure to asbestos is mesothelioma. It affects about 3,000 U.S. citizens per year. There are hardly any cases of mesothelioma that haven’t been directly tied to asbestos.

People can also develop lung cancer from asbestos, especially if they are also smokers. Smokers with asbestos exposure may also develop asbestosis, a non-cancerous disease.

If You’ve Been Diagnosed with Mesothelioma

People diagnosed with mesothelioma or another asbestos-related disease need to find a specialist. This is the first step to take after being diagnosed. You should also consider a second opinion to ensure you receive the proper treatment. Patients may also be eligible for mesothelioma-specific benefits that can help pay for treatment and lost wages.

Benefits you may be eligible for include:

Veterans with mesothelioma have more resources than the average mesothelioma patient. Veterans even have access to mesothelioma specialists within the VA healthcare system. Many people are also eligible for compensation from an asbestos trust fund. These funds were created to help mesothelioma victims and their families. Find out how to access your benefits and compensation now.

View Sources
Back to Top